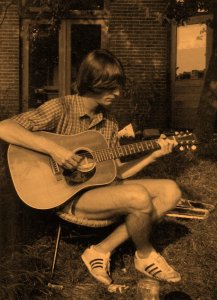 As early as 1964, when the Beatles first make their way to the Netherlands, 9-year-old Paul realizes he wants to be a musician some day. His first guitar presents itself five years later, and the boy next door teaches him how to play his first chords. A typical self-taught musician, Paul acquires contemporary pop music (Jim Croce, James Taylor, Simon & Garfunkel, the Beatles, and many others) by spinning his favourite records over and over and following other musicians’ examples, listening to them and watching them carefully as they play.

Among his earliest examples are Stefan Grossman, Ralph McTell, and Harry Saksioni; later influences are Doc Watson, Merle Travis, and Chet Atkins. From these various sources of inspiration he gradually shapes his own style and becomes adept at playing a stylistically diverse repertoire.

It is in these days that Paul develops a love of bluegrass music and adds the banjo and mandolin to his instrument collection and skill set. From 1976, he graces many stages with these instruments and acquires his reputation as one of Europe’s finest musicians in the genre.

From 1976-1983 Paul spends most of his time on tour playing mandolin with the Country Ramblers from Kampen. After that, he joins the ranks of Jerrycan, Freewheelin’, and Smoketown Strut (on the banjo). On these international tours he shares the stage with high-profile artists such as Byron Berline, Bill Keith, and Vince Gill. 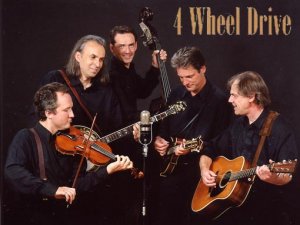 During the theater season of 1986-87, he accompanies (along with Cor Bakker) Jenny Arean in her second solo show En Voort Gaat-Ie Weer (“And On He Goes Again”). The following season, the artistic directors of the RO-Theater ask him to provide the music for their production Vuur In de Sneeuw” (A Lie of the Mind by Sam Shephard). The musicians Paul hires for this purpose continue playing together as the band 4 Wheel Drive even after the finale of the theater play in 1988.

4 Wheel Drive plays an important role in introducing bluegrass music to a broad audience in the Netherlands and beyond. For a full season, the band has a regular slot on the show B&W on national television. They perform at large-scale events like the Four Day Marches in Nijmegen (NL) and the Visaginas festival in Lithuania, to name but a few.

In 2000, the band releases their debut album No Doubt About It to rave reviews from trade journals such as the American Bluegrass Unlimited. Two years later, the group is elected best European bluegrass band of the year at the EWOB festival in Voorthuizen (NL) and awarded a showcase at the prestigious IBMA festival in Louisville, Kentucky (USA).